The 100 Hampton Road Project designed by FORM and implemented in partnership with Foundation Housing, is an initiative that seeks to curate enriched living and social environments that empower people and enhance communities. The project commenced in April 2014. As part of this project, I was invited to do a long term artist residency to produce work that reflects the identity of Hampton Road, seen through the eyes of its tenants, past and present. My intentions were to recognise the past history of the space while considering relationships and drawing connections with the current residents in order to make interesting, relevant and inclusive art works.

100 Hampton Road served several different accommodation purposes in its 52-year lifespan. From nurses’ quarters for the Fremantle hospital as its initial intention, to a back packers and youth hostel and lodge, to its current function as social housing, it has always had a transient group of residents living within its wall and moving through the space. In my research, I contacted several past resident nurses and recorded their memories.

Julie (A nurse who lived in the Olive Jones Nurses Home): ‘All had a suitcase with our cups and saucers... Suitcases played a very big part in our life because we had PTS (Preliminary Training School) and we were in ground floor as we graduated from PTS we moved up to the first floor so you packed everything up and moved up, then you went on night duty so you packed everything up again and went over to the Olive Jones home to the night duty wing.. umm 2 or 3 month on night duty and as a first year, back to Balding to complete your first year and then everything packed up and home again and so we became very adept at packing suitcases.’

Teacups and saucers were an important symbol of rest and relaxation from the strenuous life of a trainee nurse. Not being able to have many belongings in the very small rooms, these teacups travelled with the women as they moved from floor to floor throughout their 3-year stay.

They also represented a time to socialise and interact with young women who 'lived in', at the large blocks accomodation at Hampton Road. Having only small shared kitchen spaces with limited facilities for preparing meals, meant cups of tea and conversation featured regularly and were important rituals in the everyday lives of these women.

AFTER THE TEA PARTY

The small Magpie lark, also know as Mudlark, which is neither Magpie nor lark but named by English ornithologist for its apparent similarity to the Northern Hemisphere birds familiar to European settlers, is also a native to WA. In one of the images, the lark scavenges amongst the remains not unlike the origins of its name; A mudlark was someone who scavenged in river mud for items of value, a term used specially to describe those who scavenged this way in London during the late 18th and 19th centuries.

These references back to England and the end of an era, also express the changing nature of the spaces we inhabit. The title referencing that the ‘tea party’ is over, showing that we now live in a more culturally diverse and rich environment than previous generations. As the port of Fremantle is the maritime gateway to Western Australia for immigration from all over the world, it is a relevant site from which we have created our culturally diverse society.
This work is a series of 5 photographic images that make up a long table with the remains of a tea party. It marks the end of an era of the space as the nurses’ residence. The flora and fauna in the work connect uniquely to WA. The wilting flowers in the vases are Eucalyptus macrocarpa which are native to Western Australia and are also known as the ‘rose of the west’, referencing the English nature of the ‘tea party’ in a Western Australian context.

This work also pays homage to the previous history of the building as a nurse’s home. The nurses who resided here worked shifts from day to night. This image of a nurse’s uniform, floating on the dark background speaks of the absence of the nurses from the site, but references a presence to the previous history. The illuminated light box work pays respect to the dedication and compassion of the nurses chosen vocation as they worked around the clock. It also allows for the artwork to be viewed at night and creates interest by an external audience, acting as a kind of beacon to passers by and residents.

‍Suitcases are an ongoing symbol of the building at 100 Hampton Road. Over its more than 50-year life span, it has functioned with an ongoing transient nature. As there has been a continual flow of people throughout the space, the suitcase work references the nature of all of these functions and expresses the large number of people who have moved through the space. This is accentuated by the height of the pile, reaching 6 floors. This work is situated within the stairwells with an unbroken image from floor to floor. It acts as a kind of image-based chronology or timeline as it moves up the walls. 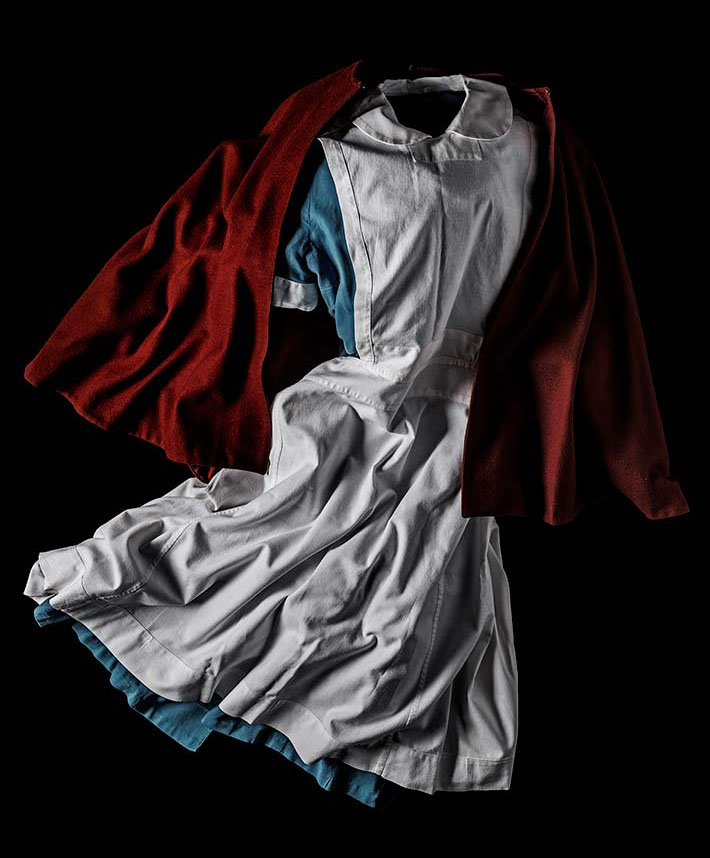